It’s actually the lowest you can score to achieve the hallowed 99th. So it’s a bit of a magic number in the GMAT universe.

These are all fantastic scores that will not limit you in terms of MBA applications/admissions.

Still, that 760/99th percentile has a ring to it and it is always extra sweet when a private tutoring student achieves such a mammoth score.

There’s no talk of retake. No what ifs.

A 760 is the kind of GMAT score that seals the deal.

Your GMAT quest is over.

You’ve succeeded. And did so in style.

There are many types of perfect GMAT scores

Don’t take the above as saying that anything other than these ridiculously high GMAT scores will do.

The ideal GMAT score is the one that satisfies your requirements.

How should you set your score goal? Take a look at the median of the MBA programs to which you would like to apply.

You may not hit the median and that is OK. But it is a great number to strive for.

Remember: the GMAT is the biggest single part of your application BUT all the rest counts for far more.

For instance, this student hit a 690 GMAT score and got into CBS.

She was absolutely thrilled. The 690 was perfect.

A year earlier Calvin, then a junior in college, had studied for the GMAT on his lonesome.

His practice test scores were excellent, ranging from 710 to 770.

They were a bit inconsistent but, again, all in the 7s and on the top end of the scale hitting 760s and 770s.

Test day came around and his GMAT score dropped to a 690.

Here is the breakdown from the enhanced score report. 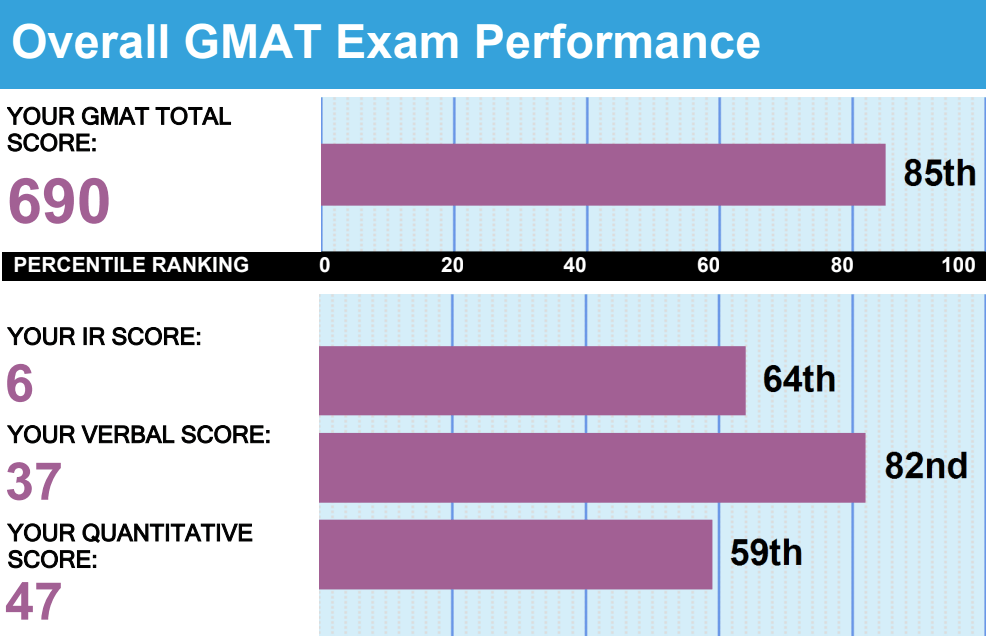 Quant was a little lower than normal but verbal had suffered a mini collapse.

A bit disheartened, Calvin put the GMAT to the side in order to focus on school.

Calvin contacted Atlantic to pursue a 740.

I think he just wanted to be above the median for every MBA program. Makes sense, especially considering how high he had scored on his practice tests.

My initial advice was just to take a quick GMAT to see if he could hit the target without much additional studying.

The practice tests were generally at or above 740 so why not try?

But he felt that he didn’t want to waste any additional time and wanted to make sure that he hit the goal this time around.

That also made sense to me.

Guided by the ESR (and our initial consultation)

There were a couple of things that stuck out on Calvin’s ESR:

From his ESR we noticed that he was a little slow on the CR and didn’t do amazingly on those questions. Yes, the 84th percentile is very good but not ideal if you are aiming for a mid 700s GMAT score.

On the other hand an 84th percentile quant score is nearly perfect since GMAT quant percentiles are whacky.

In our initial consultation call, Calvin confirmed that he felt good about CR but that on challenging questions it would take him too long to zero in on the correct answer choice. He felt that his approach was a bit scattered. 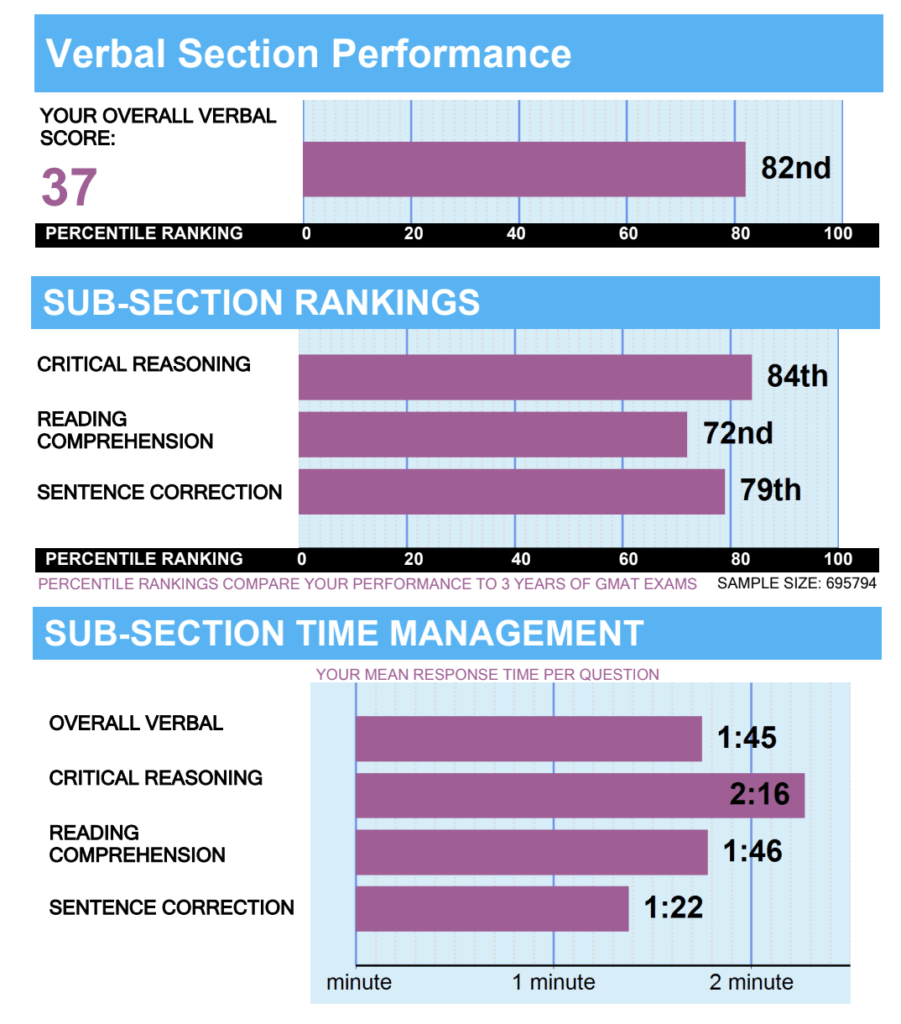 We felt it important to review a bit of fundamental CR strategy, mainly assumption based reasoning, just to make sure that Calvin was approaching the questions with the right perspective and understanding the mechanics of CR 100%.

The critical reasoning session went well and there were a few things that really clicked with him that put CR into focus.

So much so that we didn’t bother with the rest of the CR lessons. The initial discussion was enough to set the stage there. No reason to over explain or add more strategy when things are going well.

His LSAT work started off solid and then reached near perfect.

He had great instincts on sentence correction but was occasionally missing very easy mistakes.

So we worked on identifying low hanging fruit and added a framework for approaching all of the major SC errors.

On the quant side we skipped all the basic content and most of the mid level work.

While we focused sessions on verbal, I started him on some self-study mostly doing geometry.

There are a whole bunch of geometry rules so it’s not a bad thing to get started on early.

Considering his practice test quant scores, I knew he could handle the sets on his own (without session time/associated lessons) and just wanted him to refresh on the topics.

These sets were also a helpful distraction from the brutal LSAT verbal quizzes.

Then, once we had verbal in good hand, we started on our highest value quant lessons.

And we really focused on the ones that provide a change of perspective on the test that can help you excel on a variety of questions.

We never really do “math lessons” anyways. You’re not hiring a GMAT tutor to learn basic exponents rules. You can do that on your own.

Great at Math but Missing the Easy Solution

The quant lessons went well overall. The main thing I noticed was that he excelled at breaking things down and applying algebra.

The one things that could be improved: plain old practical problem solving.

It wasn’t that this was difficult for him. It was more that the math came so easily that he often overlooked easier ways of solving.

And in some cases you can’t solve GMAT puzzles with straight ahead algebra. You need a practical solution.

So we worked on looking for these less math centered approaches, especially on the data sufficiency which is more about organizing information and making inferences than actual solving for solutions.

On average, the HW numbers were excellent.

There were a few blips here and there but nothing unsettling, especially considering that we were working on very tough sets.

On the quant side we did a bunch of tough targeted work to follow up our lessons and then proceeded to the Official Guide Advanced which is chock full of super challenging GMAT puzzles.

And with the preparation firing on all cylinders it made sense do a practice test.

There’s always some anxiety as we get practice tests started. Will it all click?

We were psyched at being 10 points above the goal and just 10 points shy of a 99th percentile GMAT 760.

Interesting thing: Calvin had gotten 14 questions wrong but still a 49 on the quant.

Just something to consider.

There is a lot of space on the quant side.

He had also been a bit rushed so we added some timing strategy.

For Calvin we used not auto skips but semi-auto skips.

So we picked a few, “don’t over commit/light on your feet” questions in the middle of the exam. Basically, these were reminders that no single question matters. If stuck without a plan: move on.

And that worked really well for him.

The next practice test:

The quant had improved to an outstanding 50 with only 4 wrong.

The timing strategy had really helped.

At this point we decided to get an official GMAT booked. It was earlier than planned but with two tests above the goal, including a GMAT 760, there was no reason to wait.

We did one more practice test and even beat the GMAT 760 by 10 points with a better than 99th percentile 770.

20 points above his goal.

And in only 7 weeks.

We’ve had a few other GMAT miracles but they are not common and generally don’t come out of nowhere.

Calvin started off at a very high level and really just needed some perspective, study organization, and high quality practice to get him performing his best.

Any questions on achieving a 760 GMAT score? Do you have your own strategies for hitting the 99th percentile? Let us know in the comments.

I hope that was helpful. Good luck with your GMAT studying!

Calvin made a GMAT 760 look easy but for most people hitting the 99th percentile is going to take some serious studying.

As you increase your score there’s just less and less low hanging fruit.

And at some point you just need to great at everything.

Is a 760 GMAT good enough for Harvard?

Do you need a 760 GMAT score to get admitted to Harvard?

The rest of your application matters more than your GMAT score.

That said, it’s great having your GMAT at or above the median and a GMAT 760 certainly satisfies that.

What is the 760 GMAT percentile score?

It is the lowest composite score that equates to the 99th percentile.

A decade ago a 750 was the limit for the 99th but since then things have gotten a bit more competitive hence 760 being the new bottom.

To hit a 760 GMAT score you’ll need to excel at just about everything.

That said getting verbal perfect will generally make it much easier to hit these stratospheric 99th percentile GMAT scores.

Even if you are already scoring 90th% plus on verbal keep going!

Really. Hammer away it. Do LSAT for GMAT as described above and on our blog.

Once verbal is perfect you have some leeway on the quant.