A detailed analysis of GMAT percentiles and why an 80th percentile Quant score isn’t necessary for admission to a top MBA program.

You’ve decided that an MBA is the right path for you. A diligent person, you make a list of your favorite MBA programs and note the median GMAT scores so you can set a proper goal. Because you’ve got your sights set on the top ten with a soft spot for the top three a 700+ score seems imperative. Fair enough. You’ve done well on standardized tests and aren’t afraid of a good challenge.

Three months later after grueling through a couple hundred hours of GMAT prep you are sitting in front of a rather schlubby looking computer taking your official GMAT. It’s challenging, especially on the Quant side. You were a bit rushed there. Verbal was a slog but there were no surprises. A few clicks after the last verbal question and: 720! 94th percentile! You made it!!! Or did you? You notice that you nearly failed the Quant with a percentile score in the low 60’s. What?!! How is that possible?

Is Harvard slipping away? The short answer is: no, Harvard is not slipping away. Everything is OK. Read on for a detailed analysis of GMAT percentiles and an 80th percentile Quant score isn’t necessary for admission to a top MBA program.

Why have GMAT score percentiles changed?

The simple answer is that more people are getting perfect or near perfect scores. In fact, the way that the GMAT percentiles are now, there is no 99th percentile quant percentile. You can only get to the 97th percentile. A full three percent of GMAT test takers are ringing up a perfect quant score.

Why are people doing better? I’d like to think that Atlantic GMAT is the sole reason but the facts point elsewhere. It has to do with the shifting demographics of GMAT test takers. People from countries that tend to provide a better math education than is provided in the US have been taking the GMAT in much greater numbers.

These folks are making the GMAT percentiles (on the Quant side) much more competitive. Here is a more in depth discussion on changing GMAT Quant percentiles and how Americans are lagging. One interesting little tidbit from the article, “according to GMAC, Asia students spend an average of 151 hours in test preparation; U.S. students average 64 hours.”

Here you can see a Quant scaled score of 45 drop to the 78th percentile,

Here the Q45 plummets to the 71st percentile

Here’s all of those GMAT percentiles consolidated into one big GMAT quant percentiles mega chart following a 45 quant score from the 80th percentile down to the 55th percentile:

Part of why achieving a 2021 80th percentile GMAT Quant score doesn’t matter is that a GMAT score percentile only measures relative ability. It is the scaled score that measures absolute ability. So a Quant 45 from 2021 is the same as a Quant 45 from 1997. That’s why the sub-section scaled score is more meaningful than the percentile score. It is a measure of your skills. And, people who have been doing admissions for years recognize that.

The percentiles may change, but the scaled scores still represent a known quantity in terms of ability. Here’s an article straight from the ‘horses mouth’ (GMAC) discussing GMAT scaled scores and GMAT scoring. And here’s another GMAC paper on scaled scores: Where do scaled scores come from?

With a Quant 45 you have the skills to face the rigor of an MBA even if your percentile seems pathetic. Do you need to have a near perfect quant score to do well in an MBA program? Nope. Think about it like this: let’s say there’s a certain amount of weight that you have to be able to lift in order to become a fireman in New York City. Let’s say that’s 200 pounds. Does it make you a more qualified fireman if you can lift 400 pounds? Not necessarily. Once you’ve crossed the 200 pound threshold, there are probably other skills that are more important than lifting weight. So it is with the GMAT. At some percentile (well below the 80th percentile) your Quant skills are proven and so your total GMAT score, combined GMAT score percentile, and the rest of your application become more important.

When does an imbalance in GMAT percentiles warrant a retake?

This advice really depends on who you are (as seen in the examples above). If you have a proven math background, a 700+ score, but a super low quant percentile, you might be totally fine. If you have a desirable background/story that a particular school is looking for, again, a lower Quant score could be A-OK.

Have you had a different experience with your admissions process? Follow up with any questions or comments!

What is the GMAT out of?

What is the GMAT Score Range?

What is the GMAT average score?

The GMAT average score changes from year to year. Here are average GMAT scores for the last bunch of reported periods:

The current average GMAT score is a 547

What are the average GMAT scores by school?

Here are the top 16 average GMAT scores by school along with links to their most recent class profile pages:

Are GMAT percentiles different for the online GMAT?

No. GMAT online is the same as GMAT in person and the subsection, composite, and percentile scores are the same.

What are the GMAT percentiles for 2018?

Here are to top GMAT Percentiles for 2018

750 98% Back in the day a 750 was in the 99th percentile. That aside, GMAT composite score percentiles have stayed mostly stable.

Here are the top GMAT Quant Percentiles for 2018

51 96% The top quant percentile has dropped again. A full 4% of people are getting perfect GMAT quant scores.

Here are the top Verbal Percentiles for 2018

48 99% Notice how deep into the 99% you can go on the verbal side. That means that as a verbal superstar you have a slight advantage over a quant superstar (verbal scoring is finer. The top of the verbal is much more competitive)

Just for fun, here are the GMAT percentile charts composite scores over the past 15 years or so starting from the year 2000 all the way to the most current GMAT percentiles: 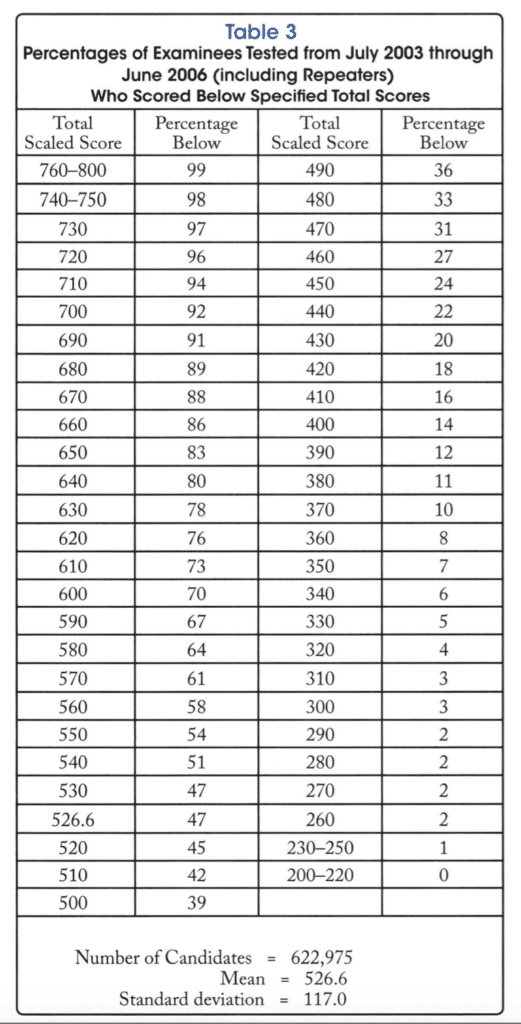 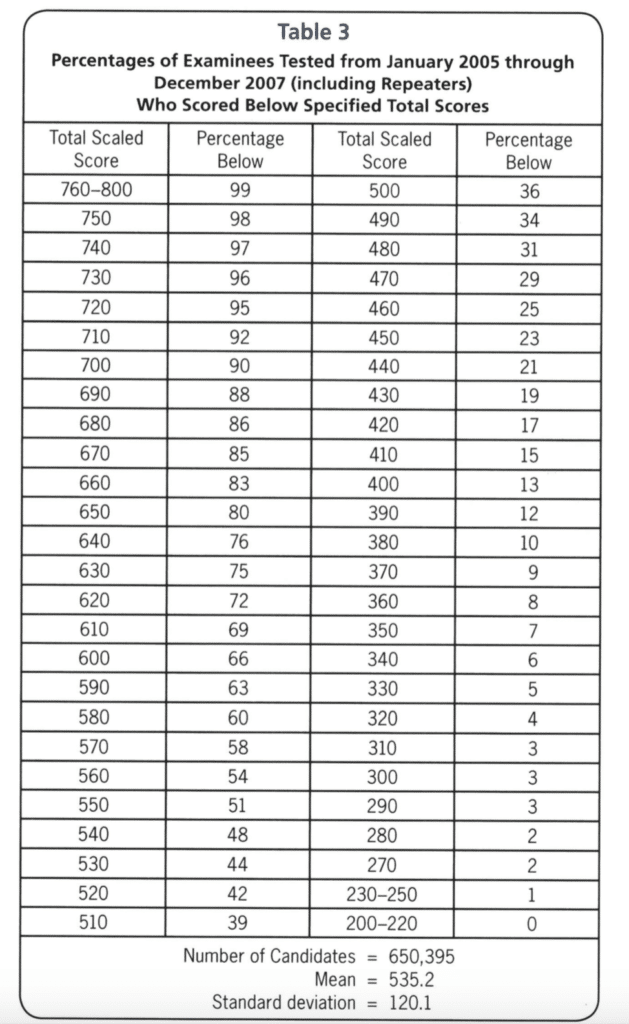