The GMAT Official Guide for 2016 (or OG 2016 as we’ll be calling it throughout this review) is the book to beat for official GMAT practice questions. It represents the newest set of available official GMAT practice questions and seems to align a bit more with what I have seen on recent Official GMAT CATs. No surprise: the guide’s explanations still need improvement as does the online question bank. Read on for an ultra detailed review of this new Official Guide for 2016 along with a complete breakdown of the new questions. Here is the corrected answer key for the kindle version of OG 2016.

“The GMAT Official Guide 2015 seemed like a thinly veiled cash grab on the part of GMAC.”

The OG 2016 problem solving seems to align more with the quant that I’ve seen on recent GMATs that I’ve taken. My feeling is that there is a bit more combinatorics on the real test and in line with that we’ve got a few extra combinatorics questions here in the new guide including a tricky code question (PS 117) with a bunch of conditions. Overlapping sets also seem to have to received a boost. A couple of oddities:

After seeing the lopsidedness in the problem solving I was expecting some weirdness in the Data Sufficiency but the OG 2016 additions seem evenly distributed in terms of content and level of difficulty. Here is a chart from the graphics maestros at Bob and Uncle Design showing most of the major changes in the GMAT Official guide 2016: 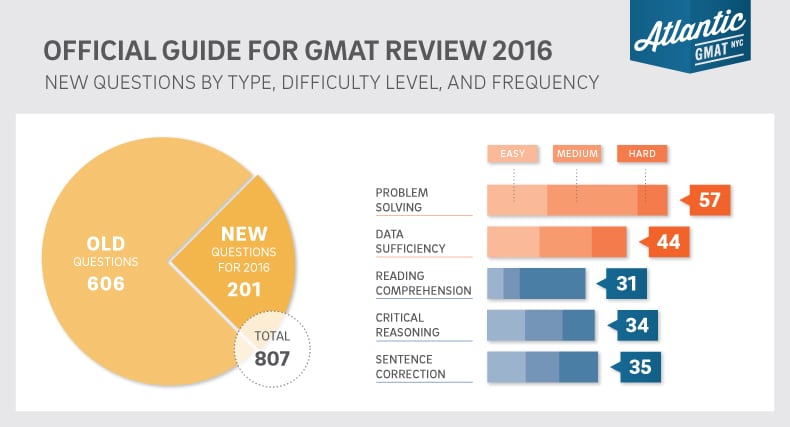 The Official Guide 2016 adds more difficulty to the reading comprehension. Unfortunately the quality does not come with quantity. I feel a little burned with only six new reading comprehension passages. Is it sounding entitled wanting an extra couple of tough ones? Maybe it is. But I did pay the full $45 cover price at Barnes and Noble. Hint: the Amazon price for this book is way cheaper (I bought my second copy from them). Back on topic: happy to see more tough passages. Happy to see more long passages. Still the Official Guide doesn’t have enough really tough reading comprehension so if you really want to knock the verbal out of the park then I would recommend supplementing with LSAT work. Here is an article on how use LSAT for GMAT verbal practice.

The OG 2016 is awash with new critical reasoning and I am happy to report that this CR aligns more with what I’ve seen on recent tests. Not only do the questions seem a bit trickier but some the question prompts hide the real question. For instance, you’ll be asked to provide a secondary explanation for a set of facts rather than weaken the argument. Those two actions are really the same but most people feel much more comfortable with the simple, straightforward language of “weaken”, “strengthen”. This is a positive move and should help prepare you for the real GMAT. One oddity here in the critical reasoning: about 75% of the updates are in the assumption based family. That’s a major shift. The official guide for GMAT review 2016 has 29 new assumption based questions. Wow. On the flipside, the content family has seen only six new additions. That seems strange considering that the content questions account for about 40% of the section. Why this lumpiness?

The sentence correction update reminds me of the Data Sufficiency update. I’m happy about it but there’s nothing terribly interesting to report. If I find anything as I dig deeper into this new OG I will report back.

Nothing terribly interesting to report on the SC. The difficulty of the questions is evenly distributed and the types of rules tested are familiar.

It took me a second to find the GMAT official guide question bank. I even googled “Official Guide 2016 Online Question Bank” and found pretty much nothing useful. I felt the same as I had felt with other GMAC digital products: annoyed. I’ve had issues with pretty much every piece of software that I’ve bought from GMAC. Alas, flipping to the back of the OG 2016, I spied a plastic pouch with my access code along with the OG 2016 question bank website: GMAT.Wiley.com. Eureka!

What you can do with the GMAT online question bank:

Considering that GMAC already has these questions tagged by type, it would have been helpful to have been able to set up quizzes by content type. Is that really so hard? C’mon! We paid the $45 ($50+ with tax and subway ride) throw us a GMAT bone! Also – no internet means no question bank. This wouldn’t be a problem in a major city in say, South Korea but unfortunately here in the USA public wifi is spotty. That means if you are not at home and want to study you will probably have to lug around the book. Annoying not only because the GMAT Official Guide is a heavy ass book but also because you ought to be doing GMAT practice ogling a computer screen as you will on your actual GMAT (here are a few more good GMAT study habits) . Practicing on the screen can make a big difference.  Oh, almost forgot the insult to injury: you only have access to the Official Guide 2016 online question bank for 1 year.

I’m conflicted about the fact that I gave this book five stars on Amazon. My feeling is that the Official Guide for GMAT review 2016 could be a whole lot better. There’s a ton of room for improvement in the explanations and in the online question bank. In addition it would be nice to just have a list of what questions are unique to each version of the Official Guide. Is that some sort of secret? And further why not make it clear why certain questions are getting removed? Right? That said, the 13th edition of the official guide was the best resource in GMAT land and now the GMAT Official Guide for 2016 is king (or queen). If you are just starting out with your GMAT preparation buy this book. If you need extra questions I’d also recommend buying this book (provided that you have exhausted Question pack 1). Happy studies!

Here are some Official GMAT resources that you might also want to have:

These first three (OG 2016, QP1, and the Exam Pack) I would consider critical. The last three are not critical but can be very helpful.