GMAT Focus, now known as GMAT Official Quantitative Practice has gotten much cheaper and is a steal [updated 2021]

These quant quizzes are priced at 54 cents per question and are a somewhat “expensive” GMAC product especially when compared to Question Pack 1 ($.06 per question).

So why bother if there are much cheaper resources? Well, with GOQP you’re getting computer adaptive quizzes with official scoring. I’ve taken all of these and the questions are fantastic.

Can you survive without it? Yes, of course. The GMAT Official Quantitative Practice quizzes are for people who don’t want to leave any stone unturned. For instance, I had a student who needed to improve from the mid 400’s to the mid 500’s. She didn’t need these. For her, Question Pack 1 was a perfect supplement to the Official Guides. But for pretty much all of our 700 or nothing GMAT tutoring students I recommend getting it. 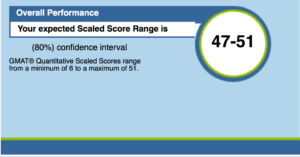 OK – I’ll stop with the GMAT Focus jokes especially because the name has changed to GMAT Official Quantitative Practice. But seriously the GOQP scoring is a little odd. First off you don’t get a single value but a range. That’s fine in itself except when the range is 37-45. That’s not helpful. The other thing that I’ve noticed is that the scoring curve seems to get tougher after the first test. So a student will actually get far more correct on the second quiz but the score will go down. Yes, I know that the quiz is adaptive and that maybe he/she got more easy questions right and less hard questions right on the second quiz but still I find it strange that I’ve seen this score drop happen somewhat consistently.

Save GOQP quizzes for the end of your preparation so that you can get the most value out of them. These are great for the last couple of weeks of GMAT preparation when you want to work on timed sections but an entire 62 minute Quant section might be too much. Look at these quizzes as the final polish on your GMAT preparation. If you’re planning on taking the GMAT twice then you could save GOQP quizzes for the second attempt.

Sad but true. The GOQP Quizzes have questions that repeat in other GMAC products. BUT with the release of the Official Guide 13th Edition the number of repeats decreased significantly. With the GMAT Official Guide 2016 and the Quant Review 2016 the overlap has been eliminated (by my count). If you do happen to see a repeat question take the time to re-solve it so that you can keep the timing fairly accurate. 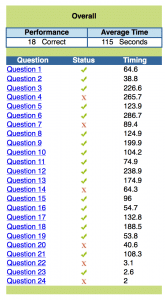 On the whole you’re buying GMAT Official Quantitative Practice for the questions and the format. The analytics aren’t all that helpful. The one piece of data that is helpful is the time spent per question. It is great to see how much time you spent answering questions that you got wrong to remind yourself about good GMAT timing habits! Same thing for the explanations. They may get you headed in the right direction but don’t expect any GMAT magic.