Which of the following lists the number of points at which a circle can intersect a triangle?

I'm often asked: "What's the most important thing to work on in order to succeed on the GMAT". Not a simple question. Of course you need all of the quant and verbal fundamentals. And you're going to need to learn GMAT specific strategy. Above all that though is what I think is the most important quality: organized curiosity. You have to be willing to explore a bit. Not randomly though. In an organized way. Conducting mini experiments to feel out a question. This geometry question from the GMAT prep tests is a good example of the type of GMAT puzzle that rewards those willing to try a few things. Most often students stare at this one and refuse to play a little bit drawing out scenarios. Time pressure gets the best of them and then it's over. You have to ignore the clock a bit so you can let some ideas flow. GMAT time pressure is real. In that it's a timed exam and for most people that adds a formidable constraint. Still, if you're going to spend precious time working on a question better make that quality time leaving yourself open to the type of thinking that tends to lead to success. Developing the habit of organized curiosity requires taking the risk of ignoring the clock. Hopefully you'll find that by opening things up a bit you think more flexibility and creatively and give yourself the time to organize things properly so that you actually are not only more effective but more efficient. This isn't a skill that you just turn on. It needs to be practiced. And while you're practicing you're probably going to fail a whole bunch. But remember to keep practicing how you actually want to perform. It's true that in the short term you might be able to get away with lower quality thinking and make some gains refining that but if you're looking to fundamentally change your GMAT performance you likely need to not only work on GMAT content by your general approach to problem solving. Diagram below with the solution and here's a video explanation: Which of the following lists the number of points at which a circle can intersect a triangle 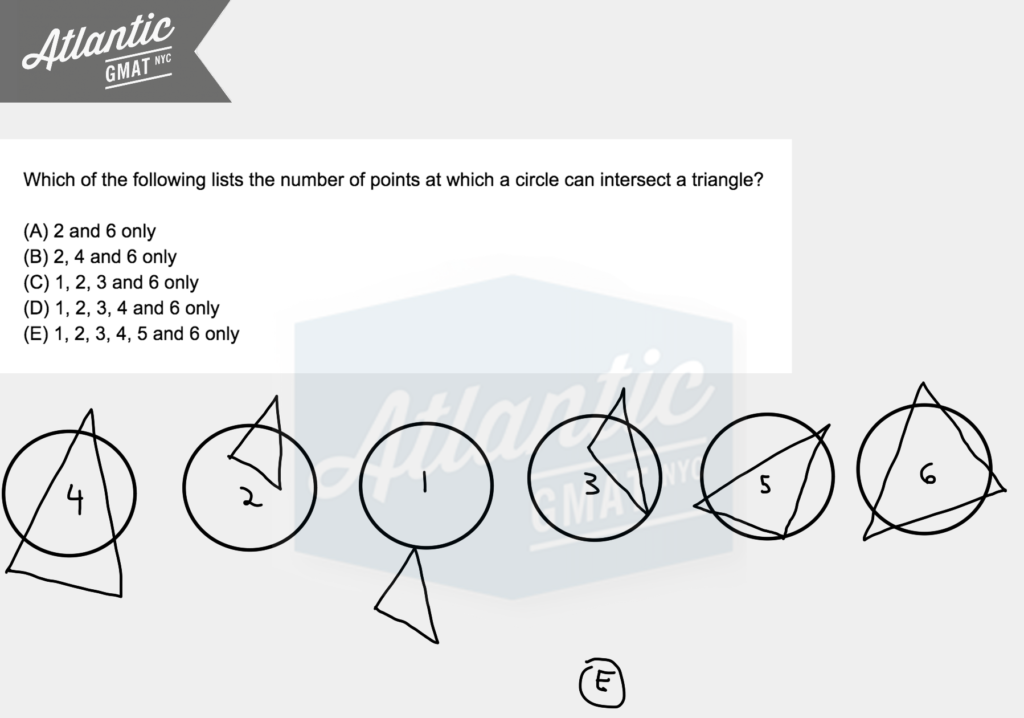 ← A committee of 3 people is to be chosen from four married couples. What is the number of different committees that can be chosen if two people who are married to each other cannot both serve on the committee?
If two of the four expressions x+y, x+5y, x-y, and 5x-y are chosen at random →