Stumped by this GMAT sequence puzzle from the GMAT Prep tests 1 and 2? We’ve got you covered!

We’ll also provide some general strategy for sketching out any puzzle question that doesn’t have an obvious framework.

OK – so what are sequences? They’re a set of numbers that follows a certain pattern. That’s it.

The subscript (for a1 I’m talking about the 1) denotes the placement of that number within the sequence. So a1 is the first number in the sequence. a2 is the second. a7 would be the 7th.

I like this graphic from the sequence page on wikipedia:

As usual let’s get the question figured out: Which of the following could be equal to n?

Easy enough but let’s think about what that means.

Since there are multiple possible values of n make sure to use the answer choices to help narrow things down.

Now let’s get those constraints organized.

Some of the numbers will 7’s

Some of the numbers will be 77’s

OK, so let’s add some variables for the things we don’t know and set up an equation.

One equation but two variables. So that’s not quite solvable with algebra. However, with certainty there are sufficient constraints that force x and y to be specific numbers (or else this question wouldn’t work).

How can you get the constraints working for you?

Be practical. Start considering what x/y values would work and maybe even what wouldn’t work. Again, especially for a “could” I’d always check the answer choices for clues.

Here they help a ton because they indicate that we must have a whole bunch of 7’s. Why? Well, even at the low end of the answer choices we have 38 terms. Most of those have to be 7’s or else the sum would be much greater than 350 (you can’t have than 4 77’s before overshooting 350).

I’d make a chart starting from as close to 350 as possible using 7’s:

Now let’s start adding in 77’s and look for combinations that work.

That works. One and done!

Let’s get back to our question: Which of the following could be equal to n?

Here’s all of that summed up in a diagram: 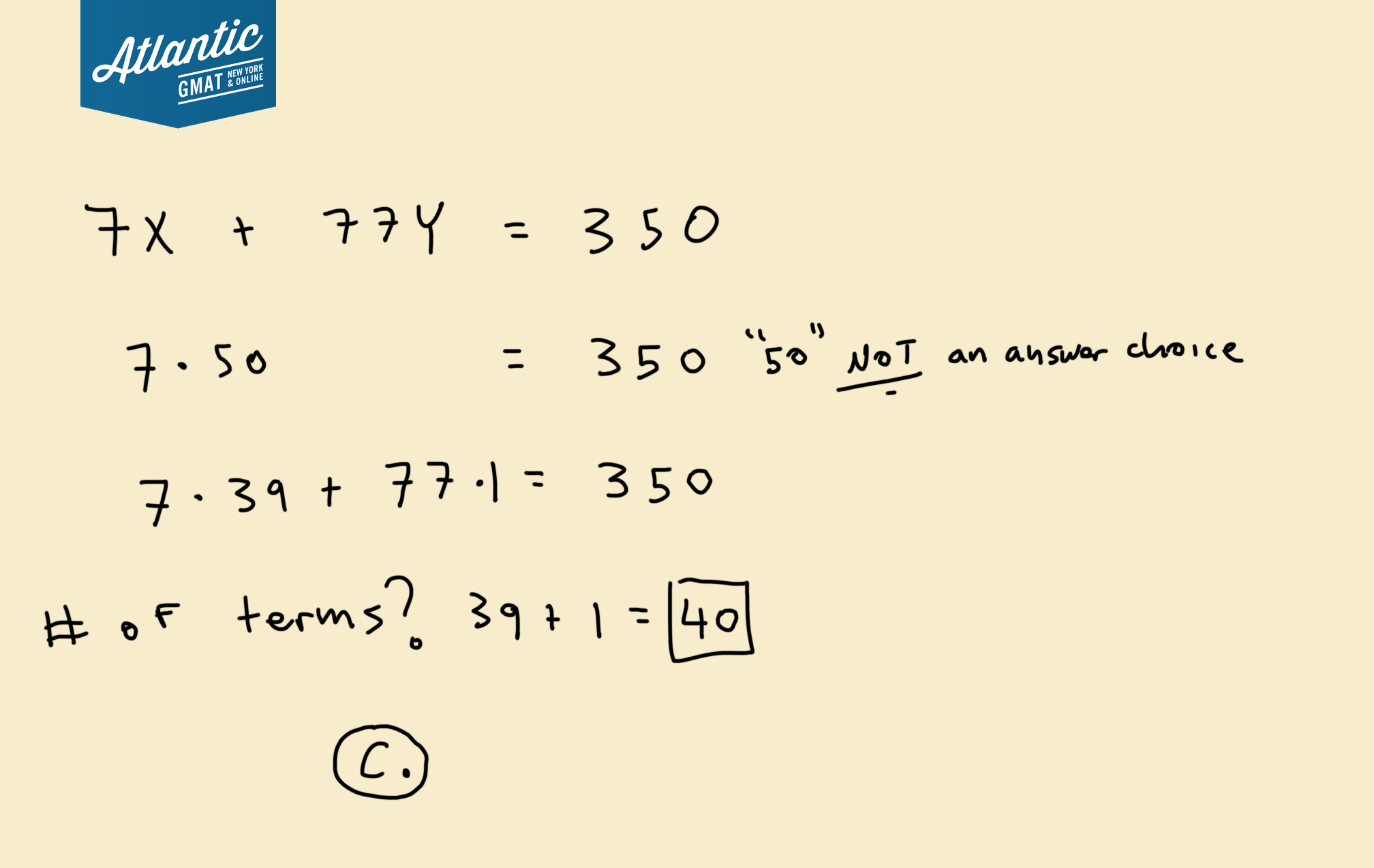 There’s another way to organize this one and it’s worth pointing out because it highlights a good GMAT habit: factoring!

Notice the 7 and 77. It’s almost always the case that factoring will help you on the GMAT. So let’s try to pull out the 7.

That’s kind of nice. The numbers are smaller and so easier to deal with.

From there you can do the same thing we did above but with these shrunken numbers.

You still have to keep in mind that the answer choices are hovering around 40 so we need many more x’s than y’s. So maximize your x’s first.

You could have 50 x’s but that’s not an answer. Let’s start with the next interval down: 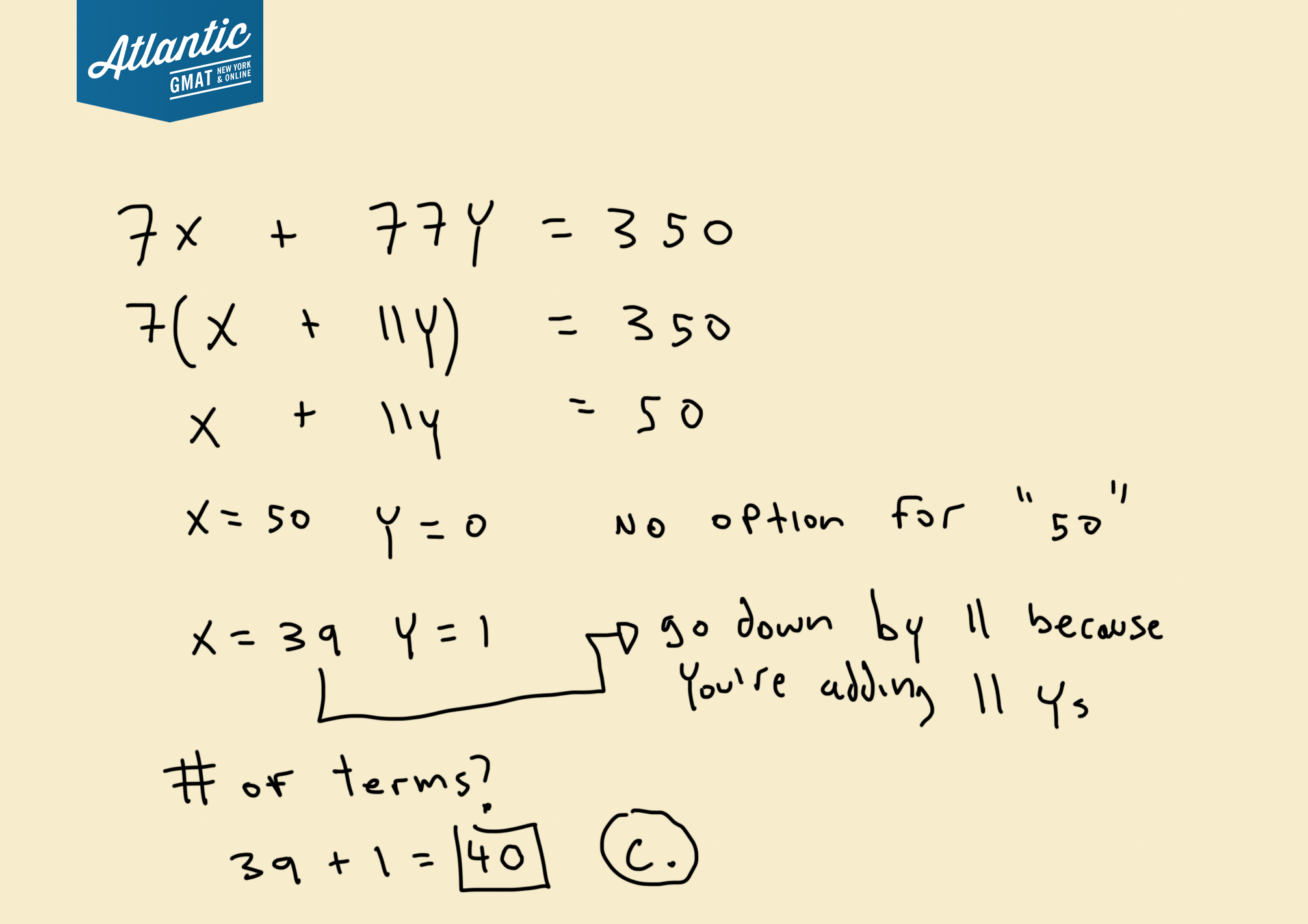 Here’s a similar but different algebra/divisibility question from the GMAT Official Guide:

Another example that uses a similar skill set from the GMAT Prep Tests 1 and 2:

And finally here’s a GMAT Question of the Day sequence and divisibility puzzle that’s very similar to the one above.