Read GMAT word problems carefully! Don't rush. Think as you read. Stop. Digest. Re-read pieces that have you scratching your head. A lot of this test be it the verbal or quant is about reading and critical thinking. Apply those skills to your quant work as you would to your verbal. For this question it's key to notice that you want to minimize one of the districts. Great - how do you do that? Maximize everything else! Are there any constraints? Yes! "No district is to have a population that is more than 10% greater than the population of any other district". Any other constraints? Nope. Alright, let's put pen to paper and translate the words to algebra (here's a video solution, a certain city with population of 132000). We have an equation with the districts on one side and 132,000 (total population) on the other:

Now let's apply the idea that we want to maximize 10 of these districts with the constraint that they can only be 10% greater than any other. Hmmm. How are you gonna do that? Let's create a variable for the smallest district (let's call it S). So how much greater can each of the other districts be? 1.1S (10% greater). You have have 10 of those. Now we can wrap up our equation and solve for S: 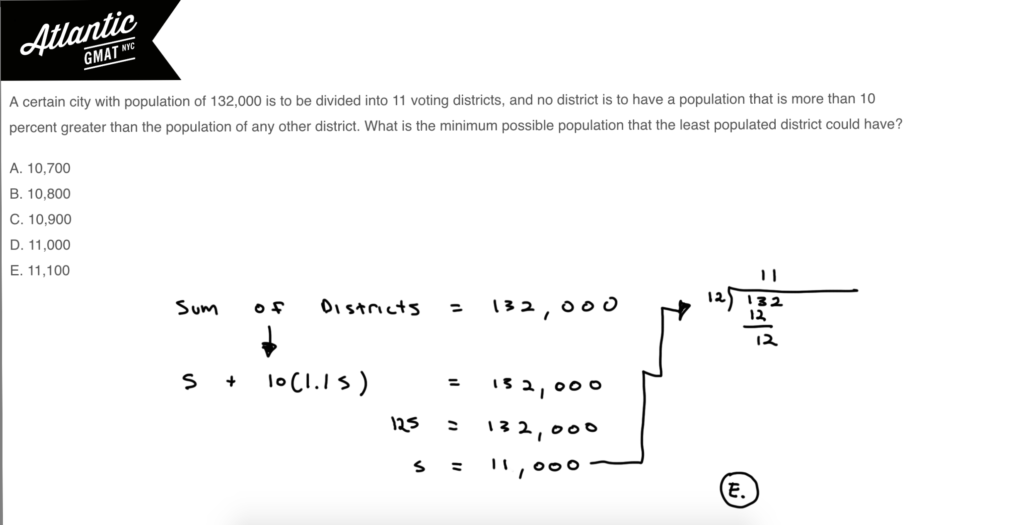 Easy right? Now, you might say "yes it was easy but I wouldn't have known how to start". That's possible. Active reading, organized critical thinking, and translating to algebra takes consistent quality practice. Focus on these things through 200 GMAT questions over a period of a few weeks (recycling anything that you have trouble with several times using an error log) and you'll see progress. Again, here's a video solution: a certain city with population of 132000 Comment with any questions or additions!

← GMAT Enhanced Score Report Updated (again)
The Perimeter of a certain isosceles right triangle is 16 + 16√2. What is the length of the hypotenuse of the triangle? →