The product of all the prime numbers less than 20

The product of all the prime numbers less than 20 is closest to which of the following powers of 10? GMAT Explanation, Video Solution, and More Practice!

The product of all the prime numbers less than 20 is closest to which of the following powers of 10?

I really like this question. The type of thinking required for success here is exactly what you need to succeed overall on the GMAT and what we try to reinforce each and every tutoring session.

Let’s list out those numbers. Take your time. Double check. This isn’t a race. Or at least it isn’t a sprint. You’ll end up saving time by doing work in a careful and considered way.

Just a quick note on primes. 2 is the only even prime and the smallest prime. Important thing to have memorize for the GMAT.

13 is a bit of a stretch but let’s call it 10 for now and judge whether it’s OK once we’ve got the first round done.

Now, I get that you might be skeptical of the approximation BUT we did a reasonable approximation and 10^6*8 is way closer to 10^7 than 10^6. It’s not close. In GMAT land I think that’s good enough and I’d pick C and move on.

There is an underlying principle that proves this without a doubt that’s worth knowing.

Back to our question!

So with those two we 100% underestimated. And then with 7*3 we also went down to 20. So it’s clear that our approximation was even smaller than the actual number guaranteeing that the product of all the primes less than 20 is closest to 10^7. 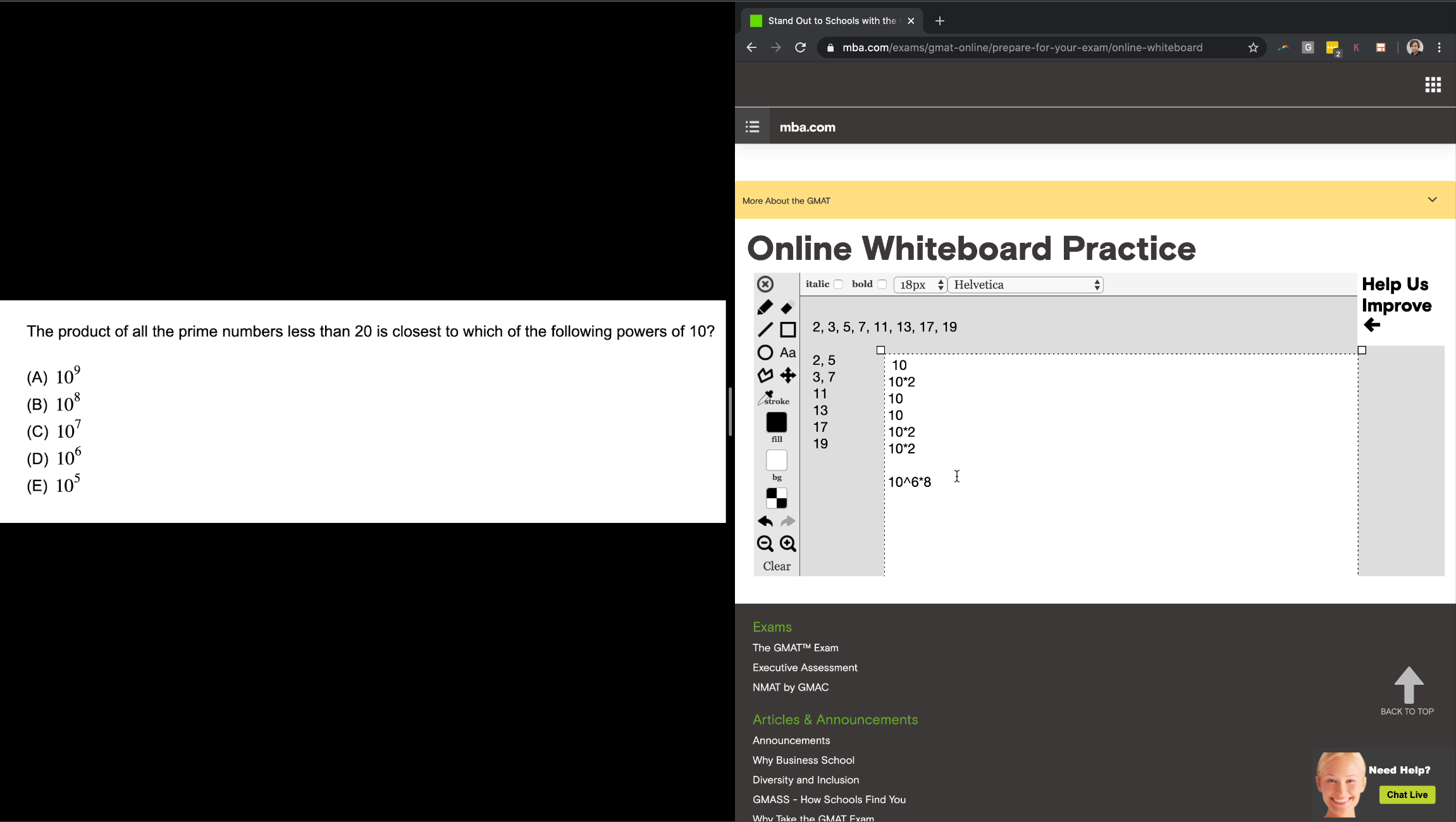 Multiplication is different. Multiplying something by 2 doubles it’s value regardless of the original magnitude (2*2 is 4, 2*100 is 200). Of course you know that. But it’s important on the GMAT to put this all together in a meaningful way. We call it “absolute vs relative” and it comes up a decent amount especially on the GMAT Data Sufficiency. It tends to be that relative info (multiplication) which stays constant regardless of the magnitude of the underlying numbers is usually more helpful than absolute info, addition/subtraction.

Video Solution: The product of all the prime numbers less than 20 is closest to which of the following powers of 10?

Not the same but requires similar GMAT-puzzle-thinking. Here’s a GMAT Question of the Day puzzle dealing with exponents and primes

Another similar but different puzzle question. This GMAT Question of the Day Exponents Puzzle deals more with constraints but again still tests the same type of organization skills that lead to success in the above primes question.