Quick Sell Outlet sold a total of 40 televisions, each

Define the question! How many of the 40 televisions were Model P televisions?

As usual, we start from the end to define what the question asks for. This time, it’s pretty straightforward – how many Model P televisions are there?

Organize the information: Put together some equations

This question gives a lot of information right off the bat, so let’s break down what quantities we are dealing with here. Let’s start with what we know:

We also know that the average selling price of the TVs is \$141. Let’s define that with an equation using the average formula:

We can be more explicit with the total money made by thinking in terms of each model separately.

We have the price for each model of TV: Model P is p dollars and Model Q is q dollars.

Or by multiplying by 40 on both sides, it looks like this:

In total, we have two equations here with 4 unknown variables.

Unless there’s something special going on we are going to need at least two more equations to solve for the number of Model P televisions.

Let’s take a look at statement 1.

(1) The Model P televisions sold for \$30 less than the Model Q televisions.

We can write this as:

Since this only gives us one additional equation, we won’t be able to solve for X with this statement alone.

While this appears to give us two additional equations, the “Either…or” means only one of these is actually true. We don’t know which.

So it’s only one additional equation but even then not helpful unless we can determine which scenario applies.

Let’s look at both statements.

Taken together, we have:

Even though it looks like we have a sufficient number of equations, we might not be in the clear. Why?

As mentioned, the “Either…or” statement suggests that either could be true, meaning there might be two different solutions for X.

This requires an additional step to see if we can rule out one of the equations in statement 2. If we can we’ll be sufficient. If not we’re insufficient

Let’s look at the two equations that share variables in such a way that we can solve.

Therefore, we have one of:

What else do we know?

Let’s think back to the original question: the average selling price is \$141.

The average selling price has to be somewhere between the two prices — it’s an average!

Let’s see this in a diagram: 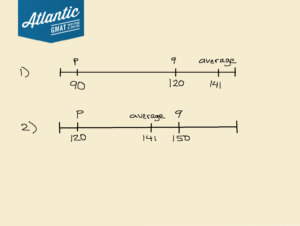 Now we actually have four equations and four variables. This can definitely be solved!

Here’s a simplified version with p and q substituted in. You can see that by substitution or adding/subtracting equations you’ll be able to solve for one variable.

So both statements together are sufficient.