Do Multiple GMAT Attempts Look Bad on your MBA Applications? 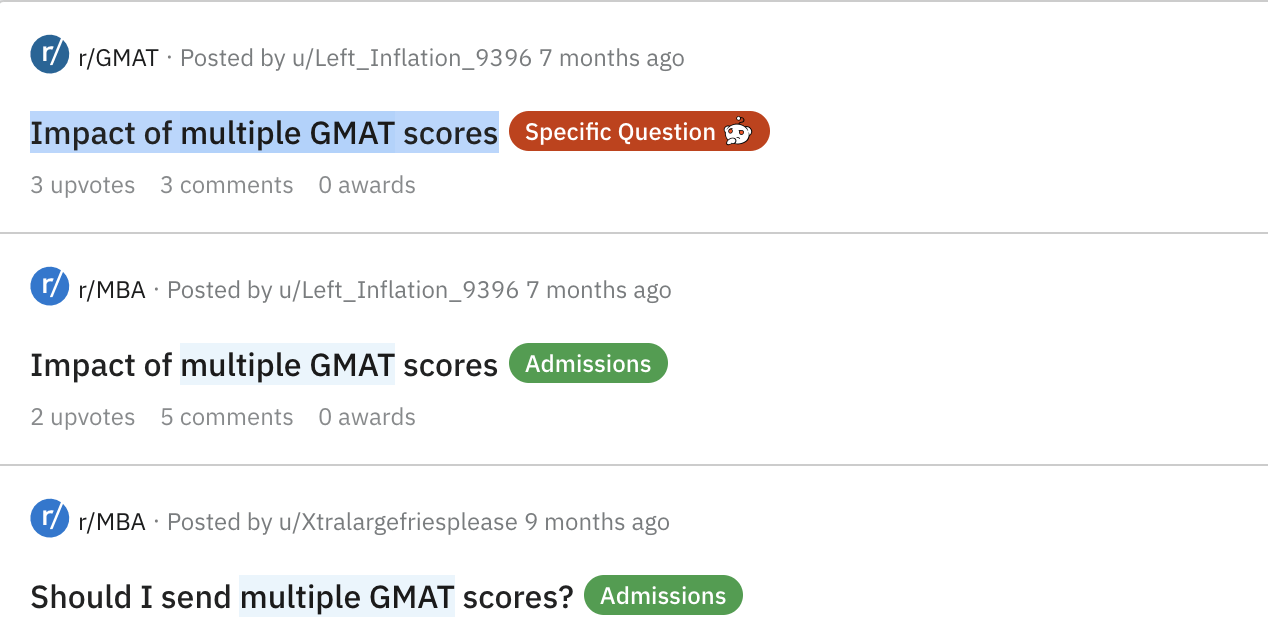 Are retakes a strike against you?

You know what looks great on your MBA application?

And, preferably one that is at or above the median of the school to which you are applying.

How you get to that score doesn’t really matter.

Well, I guess it does in some ways. Obviously don’t cheat. Be healthy. Treat yourself (and others) kindly.

But it is fine to have your own path to GMAT greatness.

Take the GMAT as many times as you need to achieve your goals. No more. No less.

Heck, I’ve taken 9 GMATs which, even for a GMAT tutor is probably considered a lot.

Does that make me a less qualified GMAT tutor? I don’t think so.

What score should I cancel?

Makes sense because there is a lot of anxiety related to retaking the GMAT and how multiple GMAT attempts, especially if far below the median of your target score, will be judged.

But I always tell clients: it doesn’t really matter whether you cancel or keep a score.

It is your best score that matters.

If anything the multiple scores show perseverance.

This tutoring student took the test 5 times ranging from the low 500s to a 720 and was admitted to Stanford and we have many other similar examples.

Still, if requested, we come up with a threshold for keeping a score.

I wouldn’t automatically cancel anything below your target but anything that you would never consider applying with you can safely cancel.

But you don’t have to.

Because you can cancel scores and those cancellations don’t show up on your official score report, having a “clean” report with only one incredible GMAT score doesn’t mean that much (except that you got an incredible score).

Because, again, there could have been a whole bunch of cancelled attempts that won’t be on the score report.

Regardless, there isn’t and has never been a bonus for succeeding on the first try (except that you are probably done with the GMAT quicker).

Take as many GMATs as you need

Most people need multiple to max out their GMAT scores.

Your best is what matters.

Don’t worry about the duds.

Cancel anything way below your target or anything that you would never consider applying with.

Hope that helps take away some of the anxiety around retakes and score cancellation.

Again, if I haven’t already hit you over the head too many times with this: multiple attempts are nothing to worry about.

Comment with any questions and good luck on your GMAT!

No. Business schools can’t see cancelled GMAT scores. There is no indication on your official score report that you cancelled any of your GMAT attempts.

Should I cancel my GMAT score?

If there is zero chance that you will use it to apply to business school then feel free to cancel it. But you don’t have to. Also, just because a score is below your goal doesn’t mean you should cancel. You never know when a score will be useful. Maybe you simply run out of time or energy and won’t have another GMAT attempt but still want to apply to school.

Also, having a decent score in the bank can give you a bit of confidence for future attempts.