If x, y and z are positive numbers, is z between x and y?

If x, y and z are positive numbers, is z between x and y? GMAT Explanation

If x, y and z are positive numbers, is z between x and y?

Define the question: Is z between x and y?

Looking ahead at the statements, we can see this question is dealing with inequalities. Let’s re-express the question in terms of inequalities. We want to know if z is between x and y. Well, this is possible in two different ways:

As we work through this problem, we need to see if the information we have is enough to prove that either one of these is true.

The only information the question tells us is that x, y, and z are all positive. Let’s move on to looking at the statements with this in mind.

For a question like this, it’s probably a good idea to see if you can find a counterexample – a choice of values where the statement is true, but z is not between x and y.

That means statement 1 is insufficient.

Again, let’s look for a counterexample.

Let’s try both statements together:

At this point, trying to find a counterexample might be difficult since there’s so many values to keep track of and inequalities to satisfy. So let’s try a different approach.

Let’s narrow down the scope of the problem. Do we know anything about the relationship between x and z? Here’s what we know from the statements:

Since x and z are also both positive, we also know that:

Let’s combine this with what we know from the statements. In particular, let’s look at these two:

Since these inequalities share a 2x, we can combine them to say:

And by the transitive property of inequality (or simply that x is less than a value that is less than z), we know that x < z.

Let’s see if we can do something similar for y and z? Here’s what we know from the statements

And again, because y and z are both positive, we know:

Let’s take a look at these two inequalities:

Just like before, using the transitive property of inequality, we know z < y.

Finally, we can combine these to say:

which shows that z is, in fact, between x and y. Both statements together are sufficient.

Here’s that all worked out: 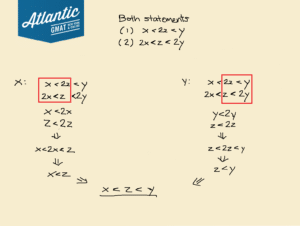