In the figure above, if MNOP is a trapezoid and NOPR is a parallelogram, what is the area of triangular region MNR? GMAT Explanation

In the figure above, if MNOP is a trapezoid and NOPR is a parallelogram, what is the area of triangular region MNR?

When I first saw this question on Exam Pack 1 I didn't think much of it. Strangely though it comes up a ton in GMAT tutoring sessions even with students who are solid on the quant. The name of the game: stay organized, make the easy inferences, and avoid any assumptions/fake rules.

What are we looking for? The area of triangular region MNR

OK - easy. You know the formula for the area of a triangle right? So start there and think about what blanks you are going need to fill in.

Anything we can add to the figure?

Yes! Both a parallelogram and a trapezoid have symmetry that we can use to our advantage. Also, MNR has two angles the same so the sides opposite those angles must also be the same.

If you drop an altitude at N you'll split MNR in half (because of the two equal angles). Each of those halves is equal to the triangles QOP. You can go further and add a line at O dropping down to line MP and you'll have two equal triangles on either side of the figure. I added all of this to the diagram below.

Knowing the area of parallelogram doesn't tell us the dimensions of the parallelogram or more importantly the Base/Height of the triangle. We can make an infinite number of different parallelograms with area 30. Those variations will create different areas for the triangular regions. 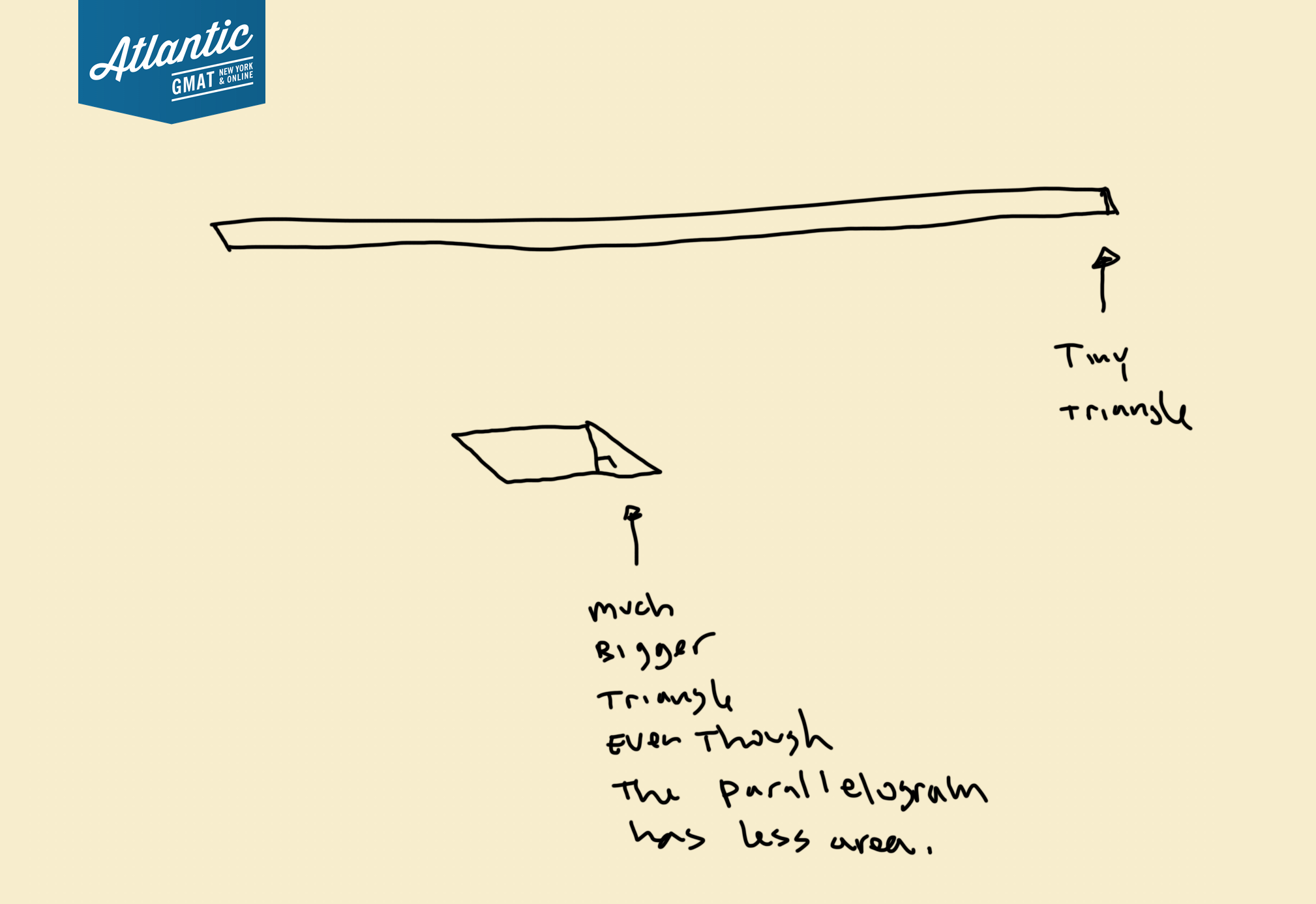 If we know the area of the shaded region then we can just double that to get the area of triangular region MNR. SUFFICIENT.

Here are two similar-ish DS Geometry questions from GMAT Question of the day: 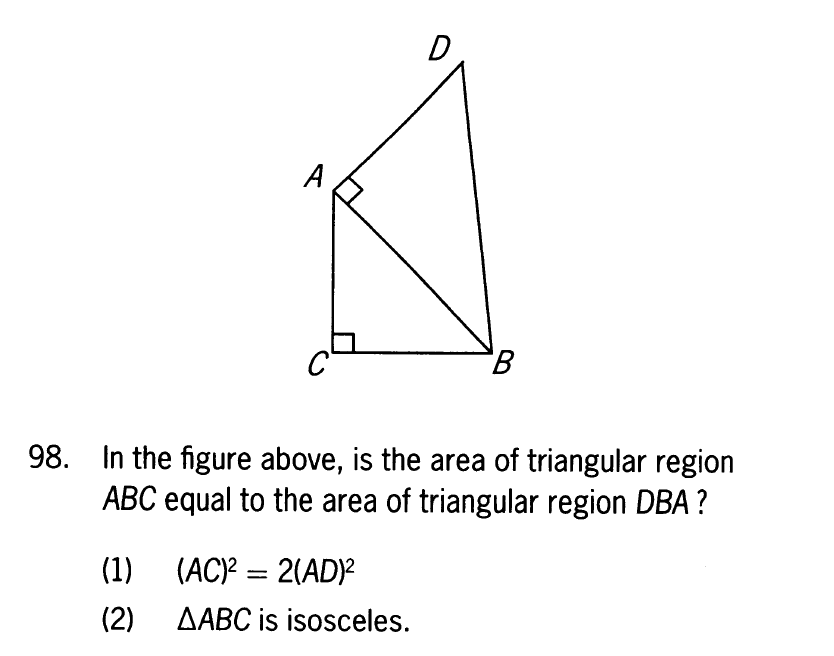 This is a tough GMAT Data Sufficiency question from the Official Guide. We'll be attacking it with Yes/No and distortion. But first let's make sure to read carefully and define the question. Get a sense for the diagram and make some inferences. We want to know whether the area of triangular region ABC is equal to the area of triangular region DBA. We have two right triangles so let's keep in mind that right triangles have certain properties and could be special right triangles, 45-45-90 (right isosceles) or 30-60-90 or some special ratio 3-4-5, 5-12-13.

We can pick some values that follow that ratio. Let's make AD = 1 so AC must be √2. Now let's go ahead and do a Yes/No. You might think, hmmm, there are a million value I could pick. This is getting confusing... That's true. However, let's keep it easy. Especially because you know that you have two right triangles. Use special triangles as the side ratios will be defined for you. Also, GMAT loves special triangles so they are often a great bet for scenarios on GMAT DS. So let's try a 45-45-90 configuration and see where that takes us and then a 30-60-90 and see if that agrees or not.

Let's take a look at statement (2)∆ABC is isosceles. 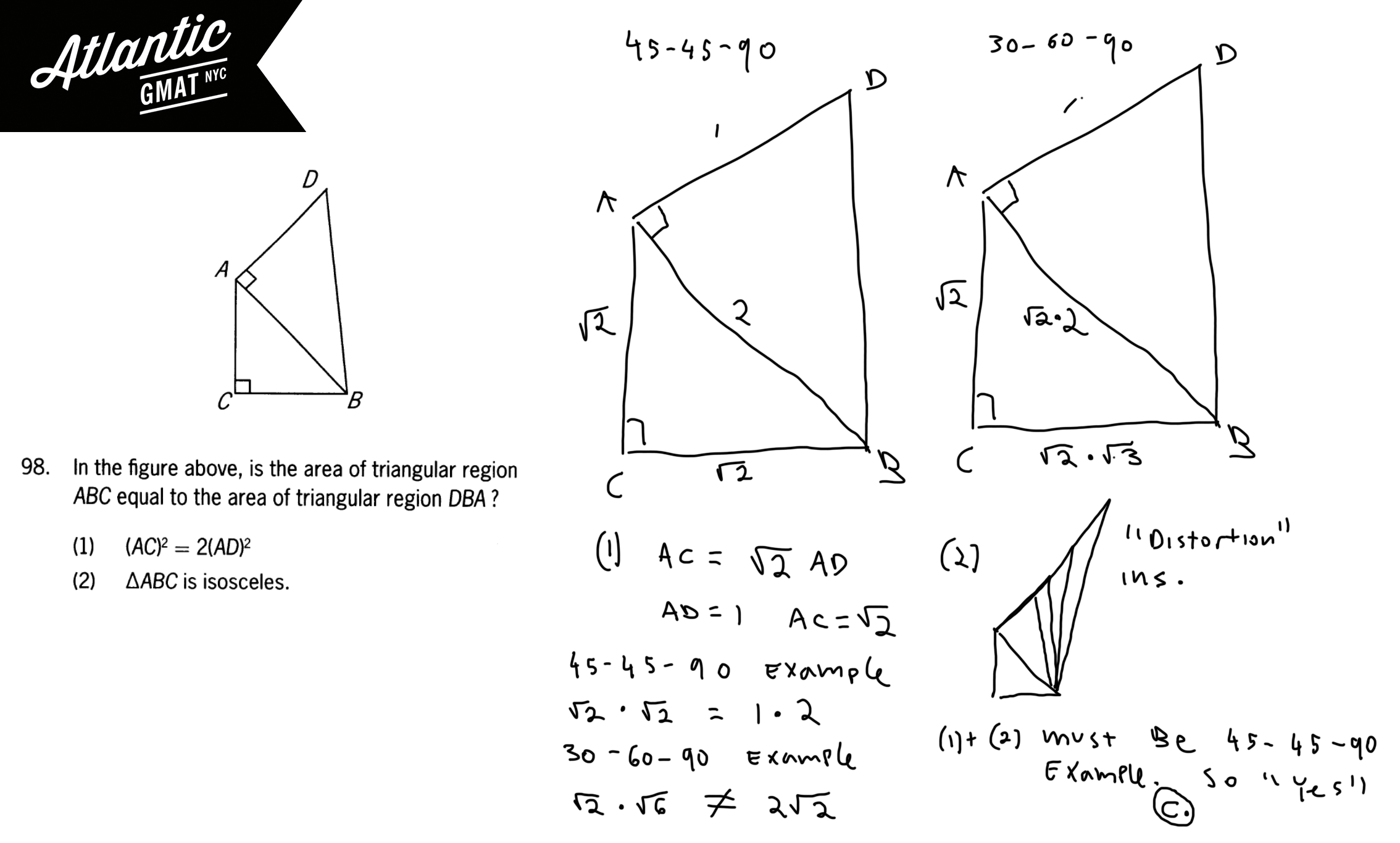 There are two GMAT Data Sufficiency strategies we worked on here:

Here are a bunch of DS Yes/No examples. A couple are very similar a couple are somewhat different but for all of them you can used either Yes/No or Distortion. I'd work through all of these to master those concepts.

Here is another challenging geometry question with right isosceles triangles: The perimeter of a certain isosceles right triangle is 16 + 16√2. What is the length of the hypotenuse of the triangle?

Here's another GMAT Question of the Day Geometry Distortion example.

And one more GMAT Question of the Day Yes/No example.

Here's an Official GMAT question with Yes/No strategy: In the xy-plane, region R consists of all the points 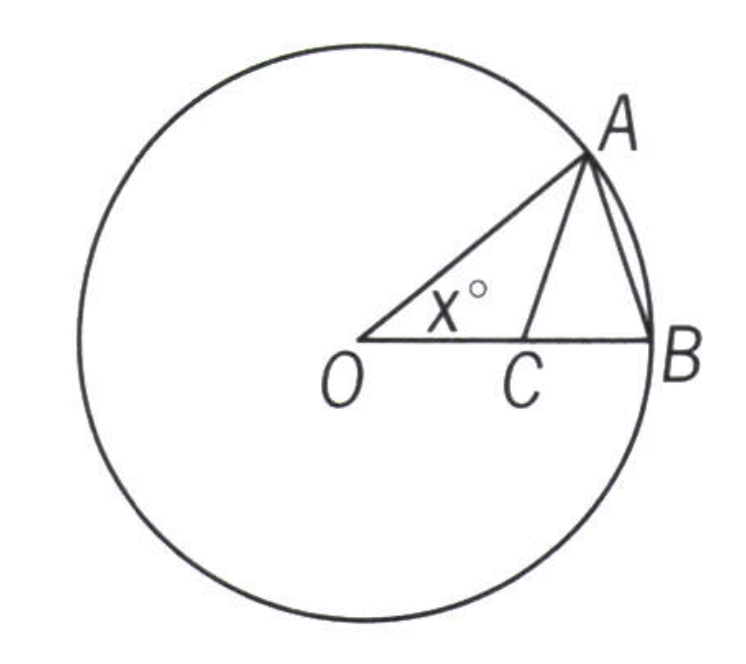 In the figure above, point O is the center of the circle and OC = AC = AB. What is the value of x?

This is a GMAT geometry question from the GMAT official guide for quantitative review. We get this one a lot in GMAT tutoring sessions so went ahead and made an in depth explanation. Video solution below.

For this question we don't have much to define. We need to find the value of x.

First step in this: 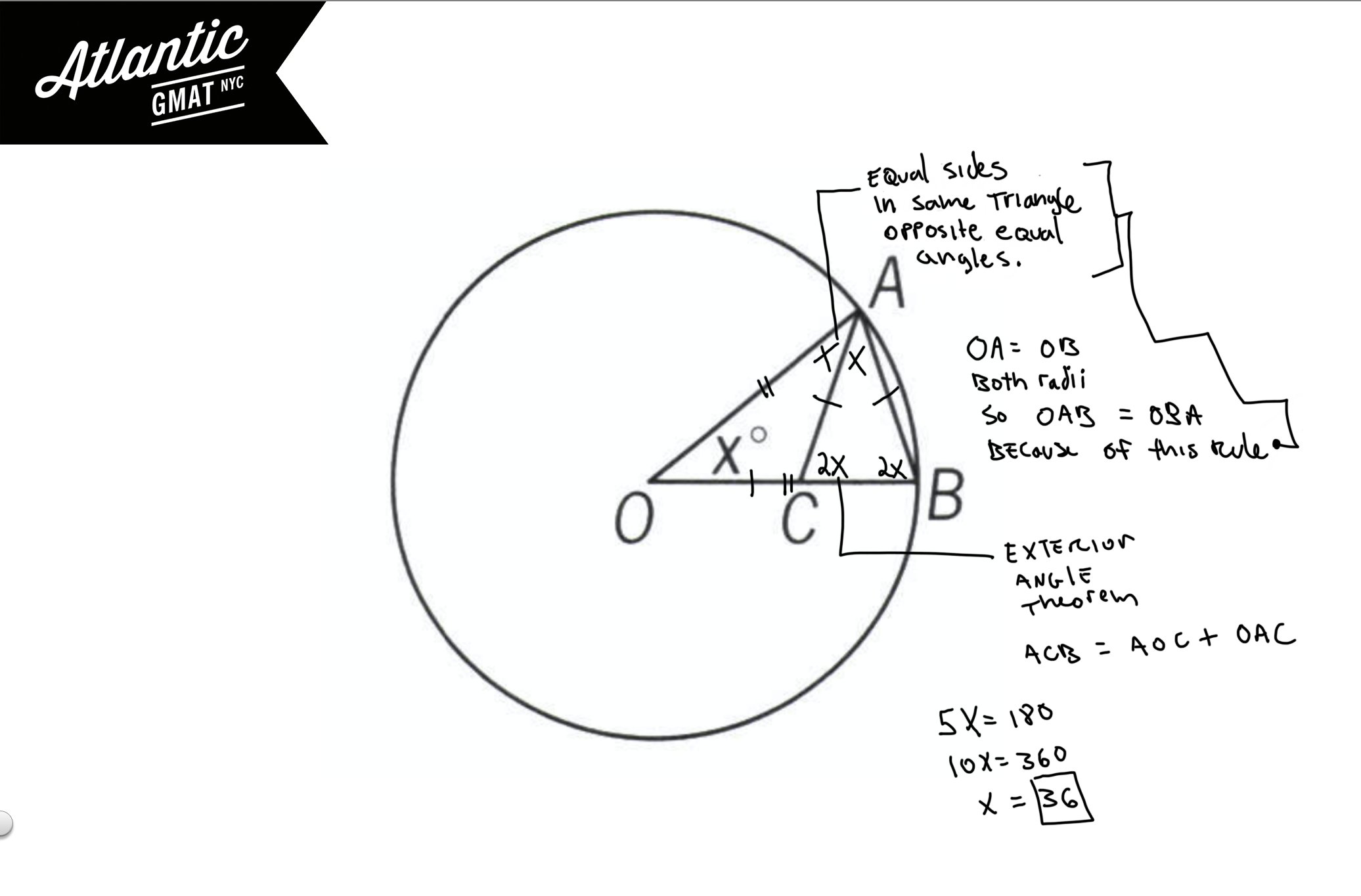 This is a tough geometry question from the GMAT prep tests (I think it's from exam pack 1, tests 3/4). The first time I saw this one I made the mistake of assuming a 3 dimensional figure. The question is much easier once you put the shape in 2 dimensions dropping point E onto the diagonal of square ABCD. At that point it becomes a set of somewhat straightforward inferences. Again, this is a very difficult question and a great majority of people won't get it correct. So don't worry if you get a little lost. What's key is seeing that the solution is basic. There's isn't any difficult math involved. The tough part is figuring out what the question is telling you.

What is the area of the triangular region BCE? Let's figure it out!

There are two important inferences to make:

Once you've done those two things finding the area of the triangular region BCE is a piece of cake. 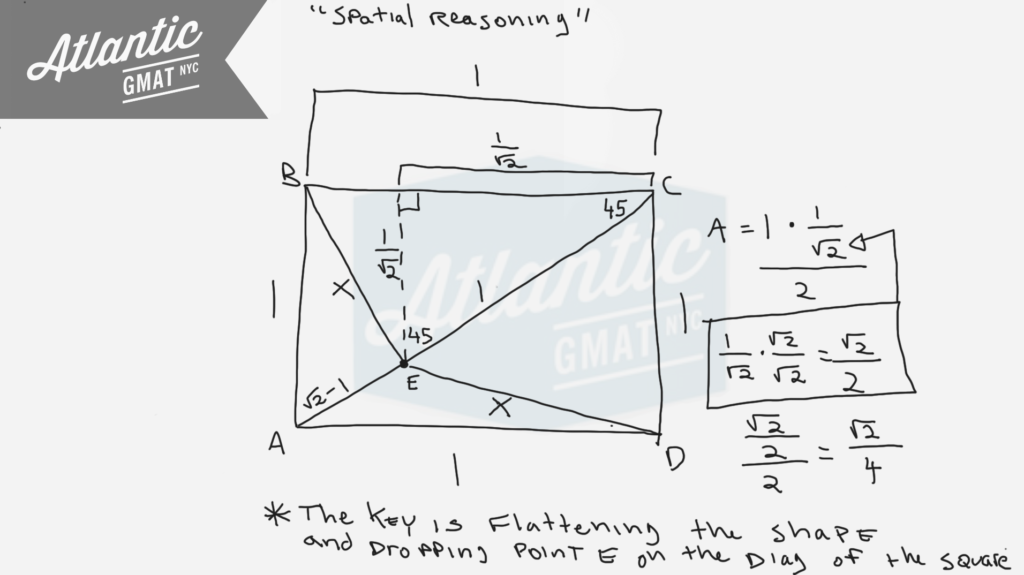 Here is another challenging geometry question with 45-45-90 triangles: The perimeter of a certain isosceles right triangle is 16 + 16√2. What is the length of the hypotenuse of the triangle?

And finally a right isosceles triangle example from GMAT question of the day.

In the figure above, equilateral triangle ABC is inscribed in the circle. If the length of arc ABC is 24, what is the approximate diameter of the circle?

It's key to know that an equilateral triangle has equal sides and equal angles measuring 60 degrees each. So each angle of an equilateral triangle inscribed in a circle cuts off 1/3 of the circle. Why is that? Review the basics! An angle on the circumference of a circle cuts off twice that angle's measure. So a 60 degree angle on the edge of a circle cuts off 120 degrees or 1/3 of a circle (120/360 degrees). A 60 degree angle in the center of a circle only cuts off 60 degrees (it doesn't have the extra space to open up). Examples below to illustrate this. Also, there's a special case for triangles that have the diameter of a circle as their base. Because the diameter is a 180 degree central angle, the angle opposite on the circumference of the circle must be 90 degrees. Not relevant for this question but good to know. 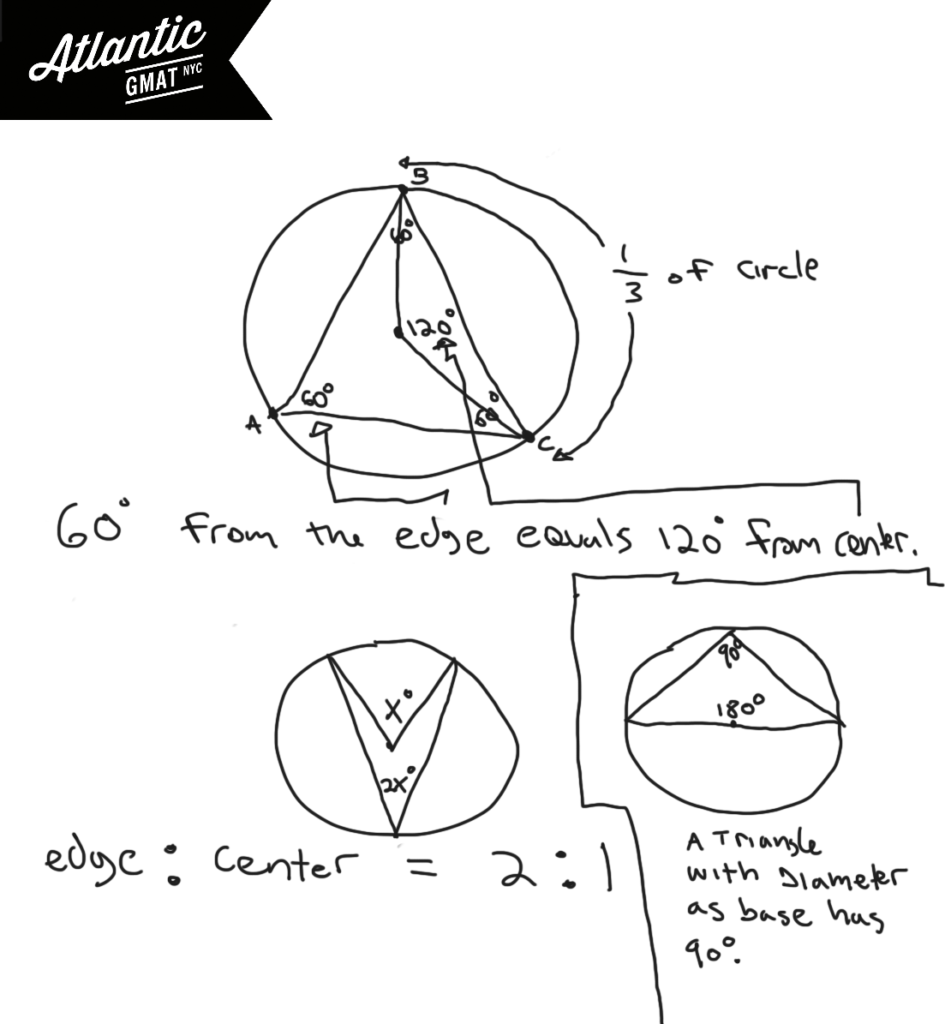 How much of the circle is arc ABC? It's covering the same part of the circumference as two of the 60 degree angles from triangle ABA. Each of those angles represent 1/3 of the circle so arc ABC is 2/3 of the circle. If 2/3 is 24, 1/3 of the circle's circumference is 12, and the entire circumference is 36. So Pi*diameter = circumference. Pi*D = 36. D = 36/Pi. D = 36/3.14. A little less than 12. 11 is by far the closest answer choice. A little rusty feeling on these GMAT geometry rules? The rules are the easy part of GMAT studying. Get your fundamentals in shape ASAP. Avoid churning through questions before getting your basics GMAT quant organized. You don't want to waste good material and it's much harder to focus on the basics while working on tougher/trickier GMAT questions. Comment with any questions or additions. Happy studies! 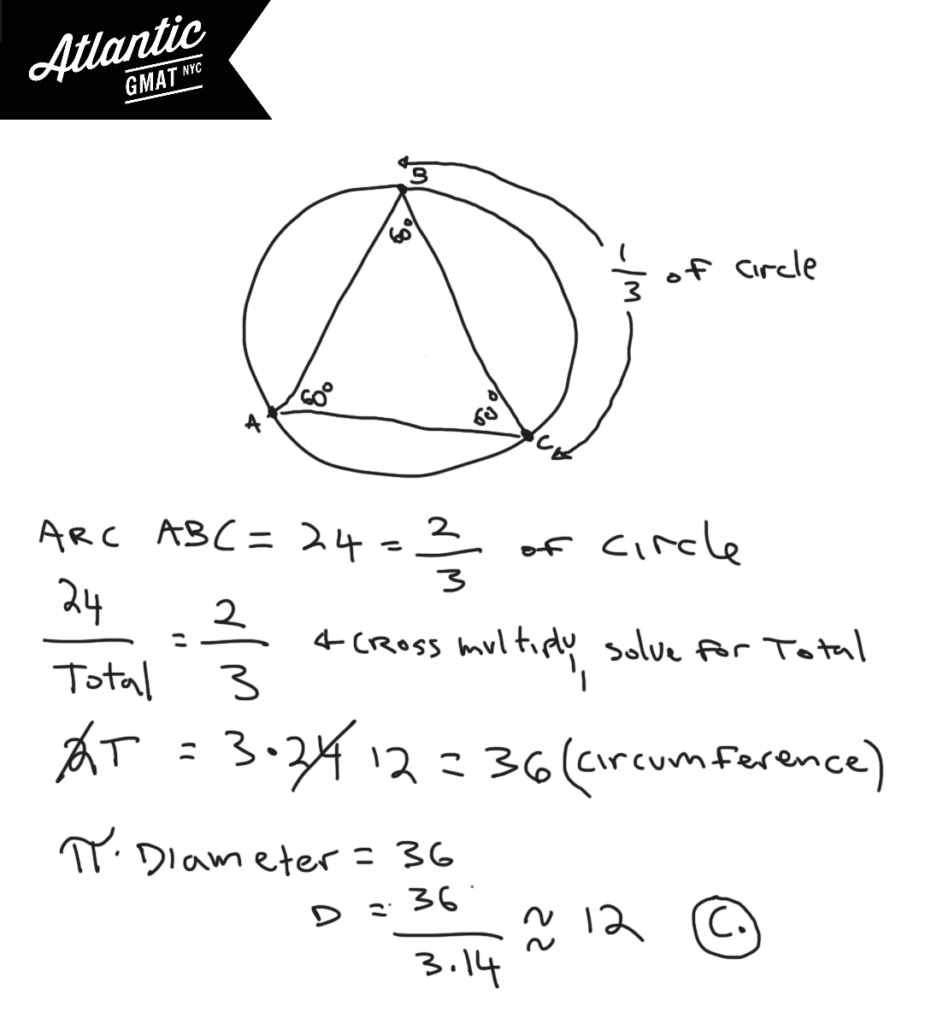